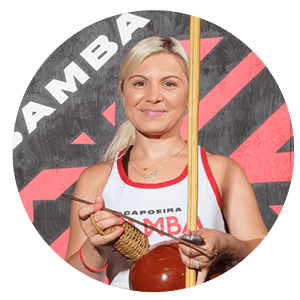 Christine, known in Capoeira as “Neném”, started training Capoeira in 2004 in Toronto. She is one of the head kids teachers and administrators at Capoeira Bamba Toronto. Her passion and enthusiasm is motivational and inspiring for students of all levels, from children to adults. In 2006 Neném completed her B.A. in sociology from York University and moved on to completing her Masters of Education in 2009. In summer 2012 Neném received her “Corda Marrom” in Axé Capoeira’s 30-Year Anniversary in Vancouver, BC. She now continues to train and teach 6 days/week to further her skills.

Graduada Neném teaches from this Location: