Capoeira is an Afro-Brazilian martial art developed in the 1500s by African and Indigenous slaves in Brazil as a form of self-defence from their oppressors. It is marked by its agile and tricky movements that may be executed anywhere from an upside-down position, to a gravity defying kick. It has a strong acrobatic component in some styles and is always played with music. The word Capoeira can have many meanings. It is believed to be linked to the tall grass, capoeira, in forests where the slaves would hide and attack their slave masters when they escaped. The term is also believed to be linked with a breed of fighting rooster. Many believe that Breakdancing originated from Capoeira. In the 1970’s, many Brazilians immigrated to the US, mostly New York, where they would practice Capoeira in the streets and it was able to influence this new dance form. There are two main styles of Capoeira, along with many other less distinct ones. One is called Angola, which is characterized by tricky, low play with particular attention to the rituals and tradition of Capoeira. This style is often described as slow, however, may be just as fast as the next style, but with different rituals. The other style is Regional, known for its fluid acrobatic, high-flying kicks and powerful attacks. Speed and agility are common traits of this style. Both styles of Capoeira are marked by counter-attacks and feints, and use lots of ground movements along with elbows, hands, kicks, headbutts, sweep and other take-downs. 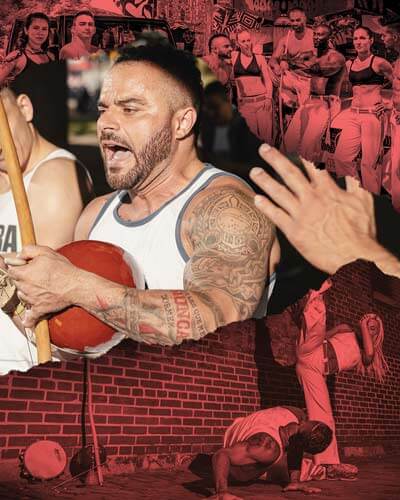 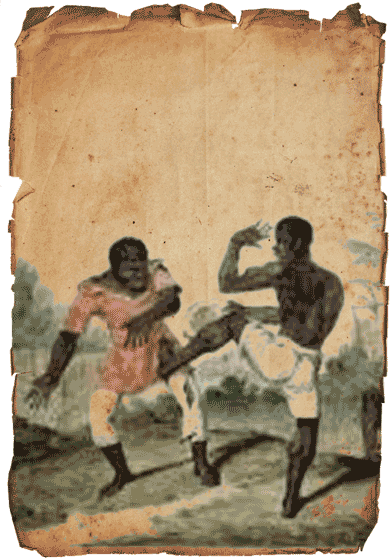 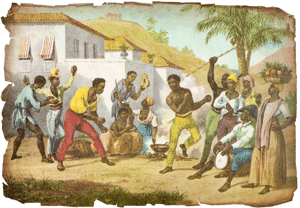 During the 1500s, Portugal shipped slaves into South America from Western Africa. Brazil was the largest contributor to slave migration with 42% of all slaves shipped across the Atlantic. The following peoples were the most commonly sold into Brazil: The Sudanese group, composed largely of Yorubaa and Dahomean people, the Islamised Guinea-Sudanese group of Malesian and Hausa people and the Bantu group (among them Kongos, Kimbundas and Kasanjes) from Angola, Congo and Mozambique. There are engravings and writings that describe a now-lost fighting dance in Cuba that reminds us of Capoeira with two Bantu men moving to the yuka drums. It is called the baile del maní. Batuque and Maculele are other fight-dances closely connected to Capoeira. These people brought their cultural traditions and religion with them to the New World. The homogenization of the African people under the oppression of slavery was the catalyst for Capoeira. Capoeira was developed by the slaves of Brazil as a way to resist their oppressors, secretly practice their art, transmit their culture, and lift their spirits. Some historians believe that the indigenous peoples of Brazil also played an important role in the development of Capoeira. After slavery was abolished, the slaves moved to the cities of Brazil, and with no employment to be found, many joined or formed criminal gangs. They continued to practice Capoeira, and it became associated with anti-government or criminal activities. As a result, Capoeira was outlawed in Brazil in 1892. The punishment for practicing Capoeira was extreme, and the police were vicious in their attempt to stamp out the art. Capoeira continued to be practiced, but it moved further underground. Rodas were often held in areas with plenty of escape routes, and a special rhythm called Cavalaria was added to the music to warn players that the police were coming. To avoid being persecuted, Capoeira practitioners (Capoeiristas) also gave themselves an apelido or nicknames, often more than one. This made it much harder for the police to discover their true identities. This tradition continues to this day. When a person is baptized into Capoeira at the batizado ceremony, they may be given their apelido. In 1937, Mestre Bimba was invited to demonstrate his art in front of the president. After this performance, he was given permission to open the first Capoeira school in Brazil. Since that time, Capoeira has been officially recognized as a national sport, and has spread around the world. Mestre Bimba’s systematization and teaching of capoeira made a tremendous contribution to the capoeira community. In 1942, Mestre Pastinha opened the first Capoeira Angola school, the Centro Esportivo de Capoeira Angola, located in Bahia. He had his students wear black pants and yellow t-shirts, the same colour of the “Ypiranga Futebol Clube,” his favourite soccer team. Most Angola schools since then follow in this tradition, having their students wear yellow capoeira t-shirts. Together, Mestre Bimba and Mestre Pastinha are generally seen as the fathers of modern Capoeira Regional and Capoeira Angola respectively.

Music is integral to Capoeira. It sets the tempo and style of game that is to be played within the Roda. The music is comprised of instruments and song. The tempos differ from very slow to very fast. Many of the songs are sung in a call and response format (quadras and corridos) while others are in the form of a narrative (chula or ladainha). Capoeiristas sing about a wide variety of subjects. Some songs are about history or stories of famous capoeiristas. Other songs attempt to inspire players to play better. Some songs are about what is going on within the roda, or a personal challenge from one Capoeirista to another. Sometimes the songs are about life, or lost love. Others are lighthearted or even silly things, sung just for fun. Capoeiristas change their playing style significantly as the songs or rhythm from the Berimbau commands. In this manner, it is truly the music that drives capoeira. There are three basic kinds of songs in Capoeira. A ladainha (litany) is a narrative solo usually sung at the beginning of a roda, often by the Mestre (a teacher). These ladainhas will often be famous songs previously written by a Mestre, or they may be improvised on the spot. A ladainha is usually followed by a chula, following a call and response pattern that usually thanks God and one’s teacher, among other things. Each call is usually repeated word-for-word by the responders. The chula is often omitted in Regional games. Finally, corridos are songs that are sung while a game is being played, again following the call and response pattern. The responses to each call do not simply repeat what was said, however, but change depending on the song. The instruments are played in a row called the bateria. The first three instruments are Berimbaus, which look like an archer’s bow using a steel string and a gourd for resonation. Legend has it that, in the old times, knives or other sharp objects were attached to the top of the berimbau for protection and in case a large fight broke out. These three Berimbaus are the Gunga (also called the Berraboi), Medio, & Viola (or violinha), and lead the rhythm. Other instruments in the bateria are: Pandeiro (tambourines), a Reco-Reco (rasp), Agogo (double gong bell), and the Atabaque (conga-like drum). It is important to remember that not all groups use all the instruments at all times and different groups may use different combinations of them (Example: 1 Berimbau and 2 pandeiros). 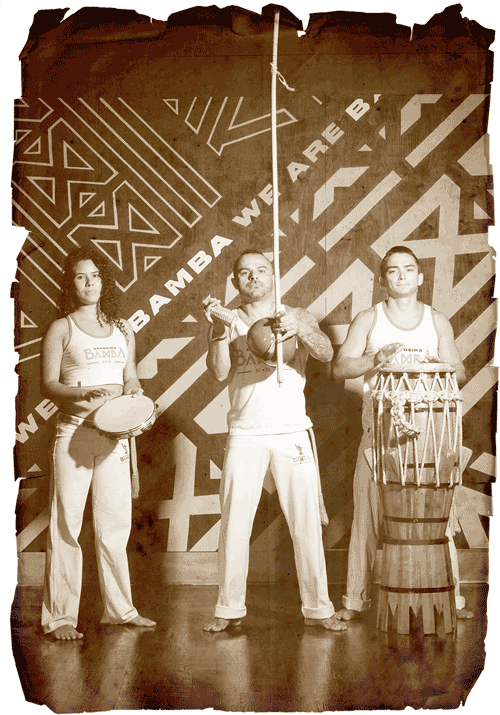 There are many different kinds of capoeira. The two largest types are Angola and Regional. Although groups of one style do exist, most groups tend to mix the two styles to some degree. Capoeira Angola groups from the Northeast will tend to identify only as Capoeira Angola and will mimic Regional for performances. Angola is considered to be the true root style of Capoeira, often characterized by slower, sneakier movements played closer to the ground. Capoeira Angola, in actuality, is played in a great range of speeds, ranging from fast, highly acrobatic movements and frenetic high tempo music to much slower, methodical movements to low tempo, hypnotic music. The father of modern Capoeira Angola is considered to be Mestre Pastinha who lived in Salvador, Bahia. Today, most of the Capoeira Angola media that is accessible comes from Mestres in Pastinha’s lineage, but this isn’t to say that he was the only one or that he was the originator. Many others helped in the preservation and propagation of Capoeira Angola, including Mestre Caicara, Mestre Bobo, Mestre Noronho, Besouro Manganga, etc. The Angola style, while emphasizing the traditions and history of Capoeira remains a contemporaneous art in the vibrant street scene of Salvador, Bahia. There is a diversity of styles and players, all of the traditional form, playing or performing in a great range of speeds and testing each other in various academies and in the street. Regional is a newer and more martially-oriented game. Regional was developed by Mestre Bimba to make capoeira more mainstream and accessible to the public, and less associated with the criminal elements of Brazil. While Capoeristas can sometimes play Angola-like, slow games, the Regional style is most often composed of fast, acrobatic, and athletic play. This type of game is characterized by high jumps, acrobatics, and spinning kicks, while maintaining the trickiness and ground-work characteristic of Capoeira Angola. Today, there are many fusion styles, which mix the Angola and Regional traditions. Some refer to this as Capoeira atual, or Capoeira contemporanea. Whether playing Angola or Regional, groups often have different styles of wildly different movements. In general, older groups/styles often have a greater emphasis on the traditions of Capoeira, while newer groups concentrate chiefly on sports-like technique. 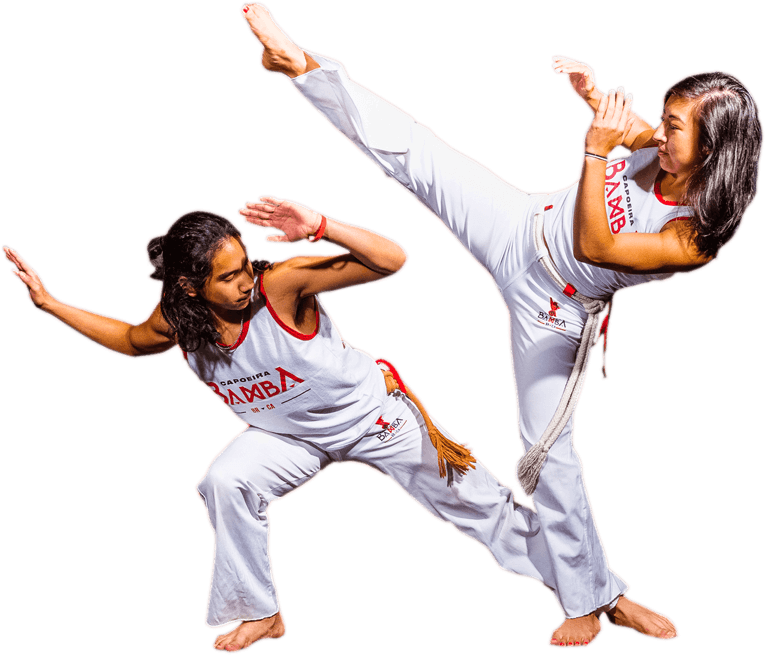 If you join a Capoeira group, you may eventually have a chance to take place in a batizado, a baptism into the art of Capoeira. At this point, you will normally be given a ‘corda’, a cord belt, as well as your ‘apelido’ or Capoeira nickname. Batizados are great celebrations of Capoeira, and normally a number of groups and masters from nearby or far away areas are invited to the celebration. These ceremonies are a great chance to see a variety of different Capoeira styles, to watch mestres play, and to see some of the best of the game. these celebrations are open to the public, and they are a great chance for outsiders to learn about the art. [source: Wikipedia]